Rockland County Pride Center likes to use a lot of hashtags on its social media accounts. Lately, they’ve employed #FollowYourFire and #DreamBig. At their annual gala this year, a circus theme offers the latter and at least one performer is literally fulfilling the former.

Professional hula hoop and fire performer Brittny Popolizio of Valley Cottage says she is thrilled to work at the Oct. 13 soiree under the Big Top. “It’s special for me to be involved in something that’s part of our community,” she said. “The larger LGBTQ and Rockland community, linked together.”

She’s just one of many Rockland-based artists, artisans and businesses that the Pride Center will showcase — and that’s where the #DreamBig comes in. The nonprofit that serves Rockland’s LGBTQ community wants to make sure it showcases local talent.

Hiring locally supports the economy, Rockland Pride Center Executive Director Brooke Malloy said during a recent visit to the barn at Bluefield Farm in Blauvelt, where props were being prepped by Nyack-based artists Kristina Pfadt Burns and Peter Cheney.

How local is this event? The circus tent that will be pitched at Rockland Lake State Park is owned by a Rockland-based nonprofit.

The catering and coordination is being handled by students at Rockland Community College Hospitality and Culinary Arts Center.

Popolizio said she heard about Pride gala when she was out one night at Prohibition River in Nyack. She overheard someone at the next table say “circus” and Popolizio turned around and introduced herself to Malloy. The connection was made.

So how does one become a fire eater? Popolizio said she saw hoop and fire performers at festivals and became intrigued. “It opened up a subculture.” 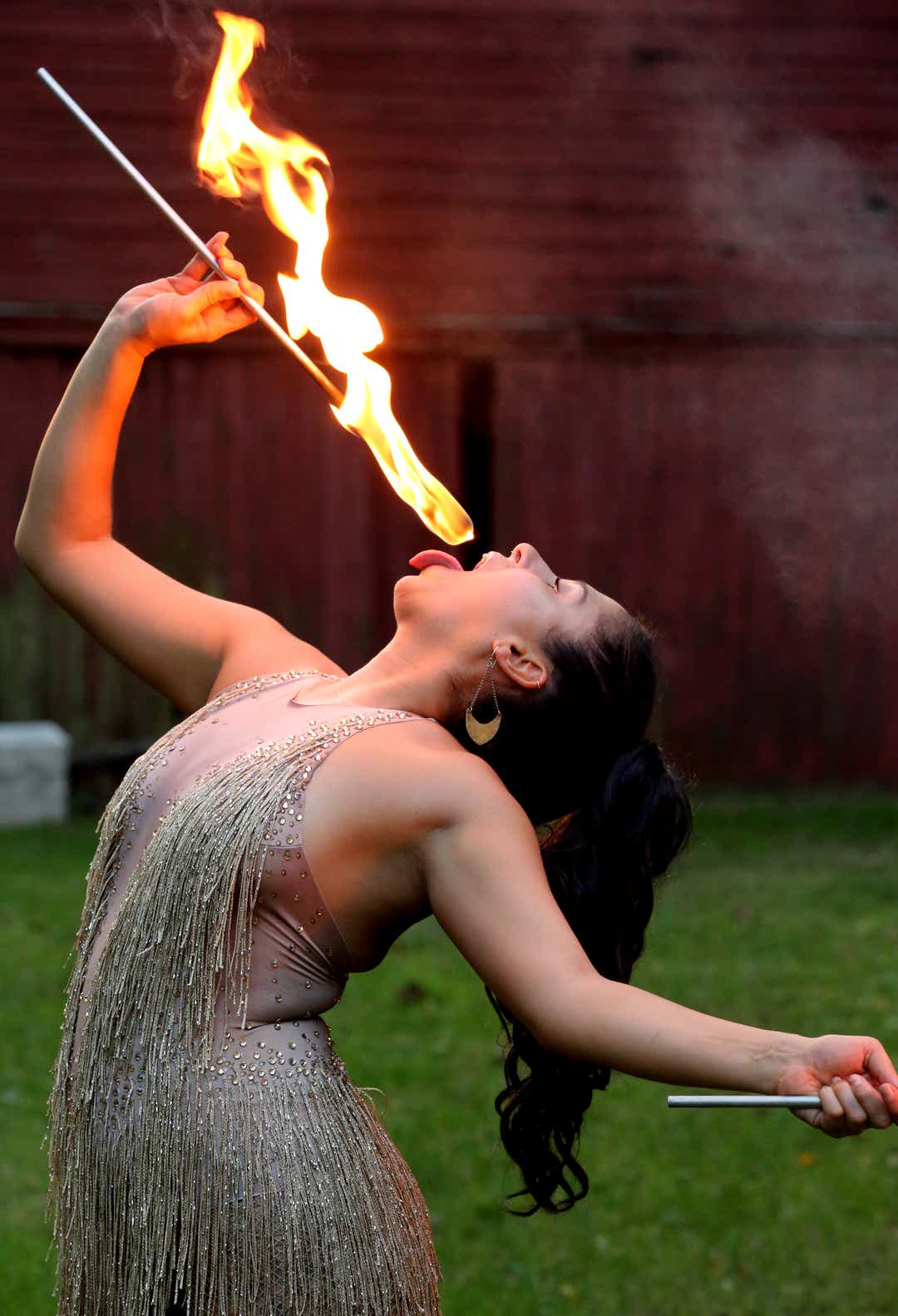 Popolizio was nervous when she first started fire eating, but she practiced and took extra courses with experienced fire performers. Soon, she said she grew more confident. Now she said she can find confidence and “empowerment in my body and my skills and my mind.”

She added: “It looks pretty dangerous and the crowd loves that.”

RCC: College named among the top in U.S. for LGBTQ students

Popolizio works at Blue Rock School in Congers as a teacher’s assistant. She performs mostly in New York City but has gone to Panama and Costa Rica to perform.

She doesn’t always tell everyone what she does, but Popolizio said she’s proud of what she has accomplished.  “I live the example (that) you can do anything if you set your mind to it.”

The nonprofit Amazing Grace Circus has operated in Rockland for 15 years.

But the timing of a circus-themed gala was kismet — Carlo Pellegrini, whose title is “Mister Amazing,” had only acquired the blue-and-yellow Big Top in April. A circus historian of sorts, Pellegrini pointed out that the tent, crafted in Italy, is a traditional structure.

Pellegrini, who has long run the nonprofit, embraced the hire-local philosophy. “That’s how small towns thrive, and that’s how, as we call it in the circus, the legacy is passed on.”

Pellegrini, a South Nyack resident, will serve as ringmaster. His spouse, aerialist Hilary Sweeney, who owns Tarrytown-based Westchester Circus Arts, will also perform during the gala.

Students from Rockland Community College’s Hospitality & Culinary Arts program are handling a lot of the logistics, under the guidance of department chairman Cris Spezial. 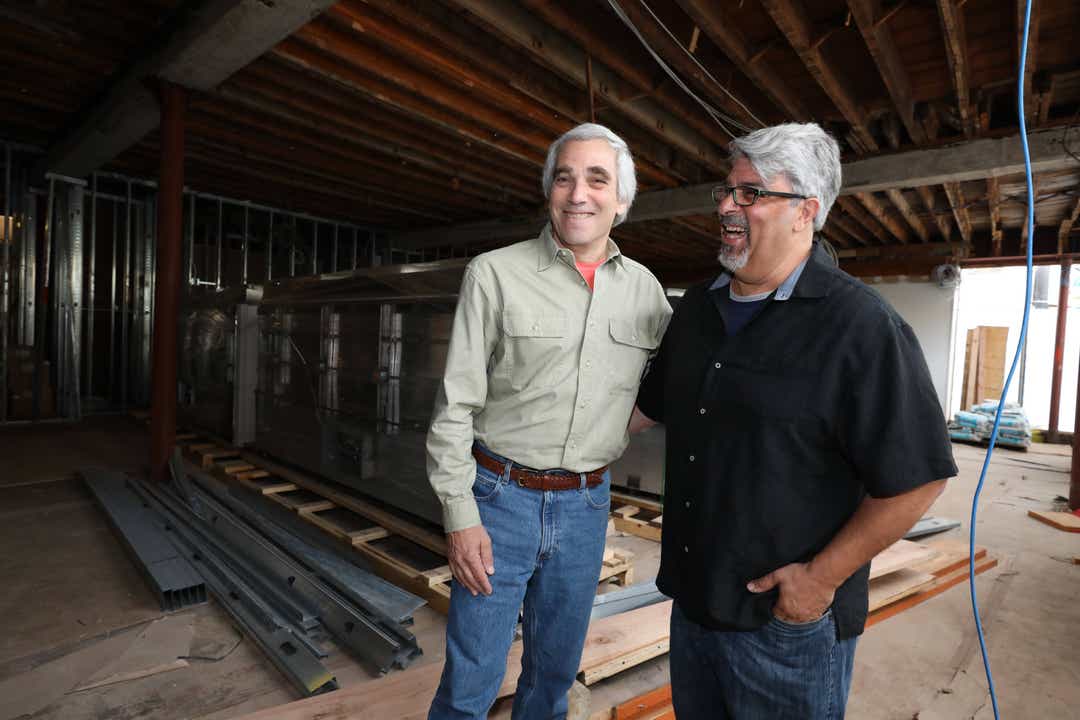 Spezial, former owner of Nyack Gourmet, said students will work on every detail. “Where’s the garbage going to be disposed of? Were the proper permits obtained? Students can learn the process.”

RCC was recently named among the Top 5 welcoming community colleges in the United States for students on the lesbian, gay, transgender, bisexual continuum. “The students want to learn but are also interested in supporting the LGBTQ community,” Spezial said. “They are really proud.”

Just like any nonprofit, Rockland Pride Center’s big gala serves many purposes, from honoring their supporters to fundraising. The added focus on local hiring — not seeking in-kind or donor support, but actually paying people — has not gone unnoticed.

“A lot of people have trouble monetizing art,” said Popolizio, who has invested in training, costumes and props so she can produce professional performances.

The event also promises to be fabulous. “When people walk up to it, they’re gonna say ‘Wow.’ Every time they turn around they are going to see something different,” Pellegrini said. “Just the way circus is supposed to be.”

Acknowledging the $250 price tag, Malloy said, “The ticket is expensive. Let’s really show them something.”

You may have missed

The oldest circus on light delete at Circus Nock – view

Circus Extreme arrives in Cardiff as part of European tour