Imagine what it must have been like when the circus came to town a century ago.

It was a time when many Americans had never seen an elephant or hippo in the flesh, nor watched aerial acrobats or listened to live jazz music. Circus day was like the Fourth of July combined with Christmas.

Many of those traveling circuses came from Wisconsin, including the famous Ringling Brothers who started their famous show in Baraboo in 1882.

The state was home to 60 circuses in 30 different Wisconsin cities including the show that became P.T. Barnum’s circus, which began in Delavan in 1871.

So it’s no surprise that Wisconsin circuses and experts are featured in a new two-part American Experience documentary airing on PBS at 8 p.m. Monday and Tuesday on public television stations throughout the state.

“Wisconsin has one of the best circus heritages. It’s the founding point of many different circuses,” said Fred Dahlinger, who co-wrote a 1997 book about Wisconsin’s circus history, “Badger State Showmen.”

New York-based circuses traveled as far as the Midwest before turning their horses and wagons around to return home by winter, until the Mabie Brothers arrived in Delavan in the 1840s and decided to buy land to open winter quarters for their circus.

Other circuses followed suit because land was cheap and the territory was hospitable to showmen, Dahlinger said. Wisconsin leaders forming the first Legislature even adjourned a meeting to attend a traveling menagerie.

Dahlinger was director of the Circus World Library in Baraboo from 1991 to 2004 before he was hired as curator of circus history at the John and Mabel Ringling Museum of Art in Florida until his retirement in July. His expertise is American circuses from 1825 until the 1930s, which is why he was tapped by American Experience producers to participate in the documentary.

In its heyday from 1870 to 1920, the circus was incredibly popular entertainment, especially in rural areas where the spectacle allowed people to escape, for one day, a life of hard work and drudgery, Dahlinger said.

“It was a form of escapism, simpler times. It had no agenda. It was there simply to enjoy, to experience seeing someone soar through the air in a trapeze, to see exotic animals or to laugh at clown acts,” Dahlinger said.

The American Experience documentary focuses on circuses in the United States from the first one-ring show in 1793 through 1956, when the big top of the Ringling Brothers and Barnum & Bailey Circus came down for the last time.

Though the Ringling circus continued for many decades — closing down last year — it no longer hoisted giant tents filled with thousands of paying customers after 1956 as other sources of entertainment attracted the attention of Americans.

RELATED: Is the Greatest Show on Earth coming to an end Sunday? Not the one in Baraboo .

Circuses existed in Europe for many years before journeying across the Atlantic. European circuses tended to be small and perform in permanent structures, which made sense in a smaller area with denser populations.

But in wide-open America, circuses began in the 1820s to travel around the country, hoisting tents to keep customers dry in small towns that didn’t have venues.

When the circus first came to the U.S., “America was a cultural backwater. Americans looked to Europe for culture,” said Sharon Grimberg, writer, producer and director of the American Experience circus documentary.

“You can see the circus growing up as America is growing up. It reflects the nation as it comes of age from a small show to a mammoth thing that’s all about size and spectacle,” Grimberg said. “It’s a dramatic change in the circus that reflects American entrepreneurship and ingenuity.”

Grimberg used photos and video from several sources, though one of the biggest contributors was the extensive collection of film, photos, posters, programs and circus route books at Circus World Museum’s archives in Baraboo.

Also featured in the circus documentary is University of Wisconsin-Milwaukee history professor Nigel Rothfels, who wrote a 2002 book about the origins of natural displays of zoo animals, “Savages and Beasts: The Birth of the Modern Zoo.” In his research, Rothfels interviewed circus historians about the importance of animals in circus shows. 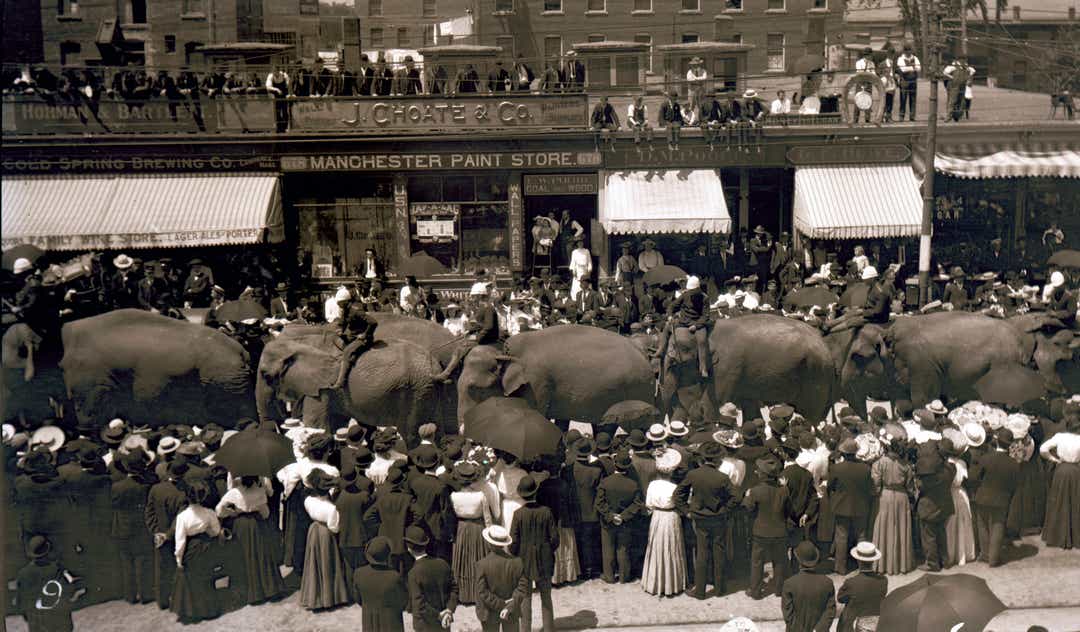 Circus animals pre-date American circuses with equestrian shows in Europe and Rothfels talks in the documentary about the connections between circuses and the animal trade.

“It captures the moment when the circus is the annual moment of the year and people can see something they’ve never seen anywhere else — that’s the animals,” Rothfels said. “When the circus came to town you could see elephants and hippos — animals you had read about in books and to feel their skin and smell them must have been an extraordinary experience.”

You may have missed

The oldest circus on light delete at Circus Nock – view

Circus Extreme arrives in Cardiff as part of European tour